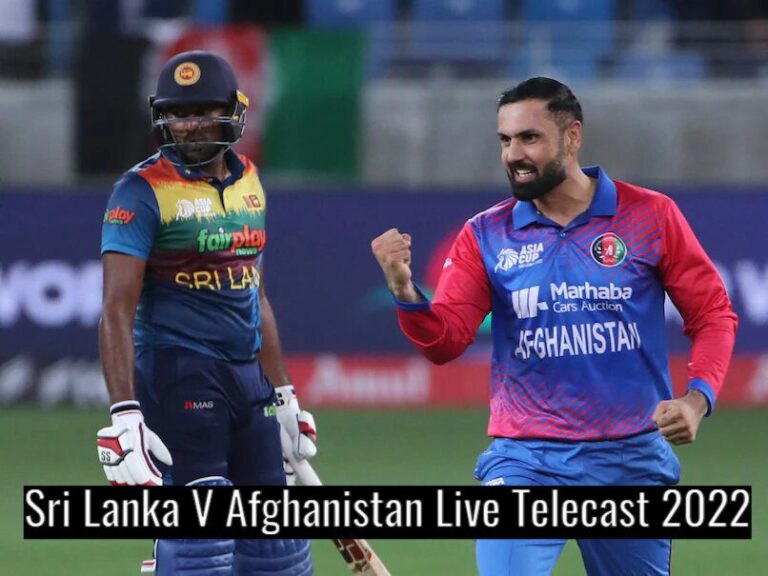 AFG vs SL Live Telecast 2022: Afghanistan and Sri Lanka will play the first Super 4 match of the Asia Cup against one another. This will be the second meeting between these two sides in the Asia Cup 2022, but only the third T20 international between them overall.

After two dominant victories, Afghanistan’s momentum seemed to be on its side, but nothing is certain in T20 cricket. It comes as no surprise that Afghanistan is the odds-on favorite at the top cricket betting websites. Afghanistan versus Sri Lanka Super Four Asia Cup 2022 match prediction and betting advice. The match will take place on September 3 at the Sharjah Cricket Stadium in Sharjah.

Afghanistan would have no problem playing in Sharjah. At this location, its spinners defeated Bangladesh in the group stage. If the pitch is similar to what we witnessed, scoring runs will be difficult and spinners will once again dominate.

Afghanistan has utilized Mujeeb ur Rahman, Mohammad Nabi, and Rashid Khan as spinners thus far. Mujeeb, who bowls in the powerplay, is currently conceding only five runs per over in the Asia Cup. He also has the most wickets for Afghanistan with five. Rashid Khan is the most frugal bowler, while Mohammad Nabi has done an excellent job of denying the opposition batters free hits. Fazalhaq Farooqi’s emergence has further strengthened Afghanistan’s bowling attack.

The Afghanistan batting lineup can occasionally be a weak point. Rahmatullah Gurbaz and Hazratuyllah Zazai provide fireworks at the top of the order, while Ibrahim Zadran and Najibullah Zadran are the two more reliable hitters in the middle. Occasionally, however, Afghanistan’s batting appears to crumple and collapse.

Sri Lanka achieved its second-highest chase in its last encounter against Bangladesh. This was a tough match in which Sri Lanka committed several errors but benefited more from Bangladesh’s errors. In the end, Kusal Menia and Dasun Shanaka’s strong batting performances brought them home.

Chamika Karunaratne’s multifaceted contribution should likewise not be taken lightly. He has contributed in both previous encounters. During the group stage, Sri Lanka’s bowling assault was defeated by Bangladesh and struggled against Afghanistan. The team’s dependence on Wanindu Hasaranga is evident, but Mahesh Theekshana is also a formidable wicket-taker.

Cricket viewers in the United States can watch the live match on Willow TV. Sony Ten and Sony Ten 2 telecast the AFG v SL 2022 in the Indian Subcontinent. Pakistani cricket fans can watch the live cricket match between Afghanistan and Sri Lanka on PTV Sports and Ten Sports.

At the opening match in Sharjah, conditions were slow, difficult for batting, and spin-friendly. It is improbable that the groundskeeper could have drastically altered the pitch in just a few days, thus the same type of surface can be anticipated. The number of sixes hit on Sharjah’s small boundaries could be lower than anticipated, and chasing a total of about 160 will be pretty difficult.